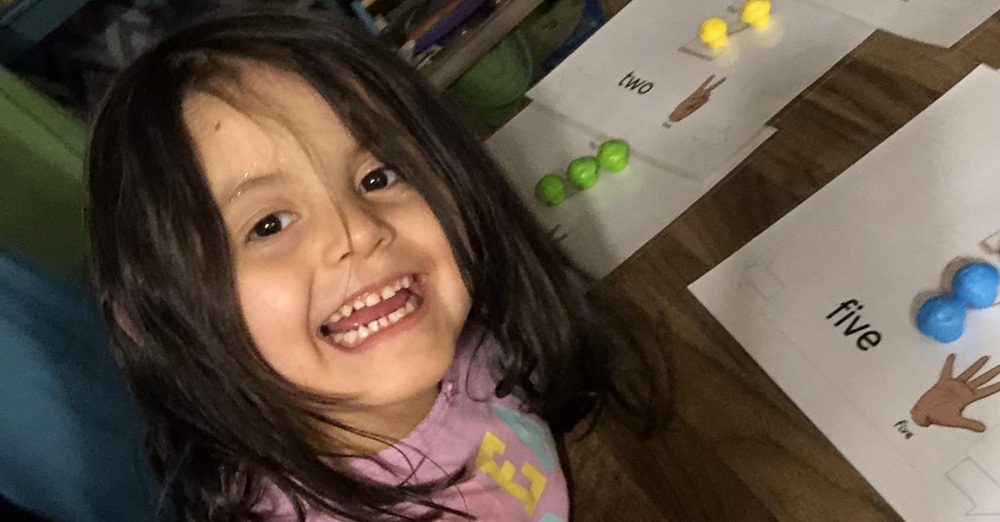 Students across the state are adapting — or at least trying to adapt — to online learning, while others return to classrooms.

The Arizona State Schools for the Deaf and the Blind welcomed some students back last week. But many students with visual and hearing impairments are learning to navigate their worlds from home.

Students and staff who had hoped to return to classrooms are instead learning from home — and they want desperately to be back.

“We’re all longing for that day when we can see the faces and hear those voices and see those smiles,” says Kelly Creasy, the principal at the ASDB Tucson campus.

In June, she was optimistic, planning to have students return to campus this month. She explained how her relatively small batch of students — less than 200 each year — made it easier to ensure kids would be safe.

But so much has changed since June. The state released guidelines and a three-part test for reopening. According to that test, her students can’t come back just yet.

School leaders can still choose to reopen despite the state’s recommended metrics, and some have. But not Creasy — not entirely anyway.

Usually, about 40 students actually live at her Tucson campus. Unlike other schools in the area, Creasy’s serves students from every corner of the state, from Tuba City to Nogales and everywhere in between.

Families were given the option to return if they lacked access to vital internet service at home. Fifteen students returned.

“Being here is going to be a little different,” Creasy says. “We have them clustered into their dorms. So, essentially, we’re creating our own bubbles for each of the groups. So, we’ll use four dorms, and they’ll just stay within their dorm. Staff will just be assigned to that dorm to work, so that we keep it as safe as possible.”

And visually impaired students will learn how to keep a safe distance from their friends and teachers, even if they can’t see them.

“One of the things we talked about with our visually impaired students is what is six feet,” Creasy explains. “And so, we talked about getting a mop or a broom that you have in your home and holding one end and having a family member on the other — that’s about six feet. So, hearing what that voice sounds like as it gets closer to you.”

The rest of Creasy’s students received laptops, braille tools, even Wi-Fi hotspots if they were requested.

Creasy said buses loaded with more than 100 kits were sent out across the state, an effort that cost more than $100,000. About $60,000 of that sum came from CARES Act funding.

Amelie Morales has been receiving materials from her teacher at the Phoenix Day School for the Deaf all summer. She started class online last week. It helps that she knows — and rather likes — her teacher, Stephanie Voss. Even if the connection isn’t perfect on Zoom.

Amelie’s mom, Laura Morales, says something is clicking for her daughter despite the challenges of learning from home.

“A lightbulb just went off, and she’s just been blowing up in language,” Morales says of Amelie. “I’ve always signed to Amelie, and it’s just like — she’s signing so much. And I’m just like, ‘Whoa. Where did that come from?'”

Not every ASDB student has a parent who can use ASL, like Morales, or a family that is totally comfortable with letting visually impaired students get around on their own.

Some have been deeply affected by the pandemic, both in terms of accessibility and emotionally. Creasy says some lost loved ones or members of their communities.

“Some of them are coming back from reservations and feel like this may be a safer place right now,” she says. “And, you know, that first couple of weeks or so — everybody, whether they’re here on campus or we’re seeing them via Zoom, we’re going to be really paying attention to how they’re doing and what other supports can we provide to that student and their family.”

And so much of that falls to the teachers.

“We threw together materials and tried to get those into the hands of families,” says Stephanie Voss, Amelie’s teacher. “And then, we just had to try and take what we usually do and figure out how that could be done on Zoom in a way that was meaningful still for young students.”

Voss sent Amelie and her five other deaf students activity packets to keep them learning after schools shut down. But these are key years for them to develop language skills, and she’s worried.

“With 3- and 4-year-old deaf children, sitting in front of a computer is not the best way to learn,” Voss explains. “We have such a limited time for all students to gain language, so it’s very stressful for me to think that one whole year of their early childhood language development years could be online.”

For now, the school year is not what everyone was hoping for. But they’re trying.

And parents like Morales are finding hope in their children. She once felt inadequate for her daughter. The pandemic and her daughter’s growth despite it has shown her otherwise.

THIS EVENT HAS BEEN CANCELLED